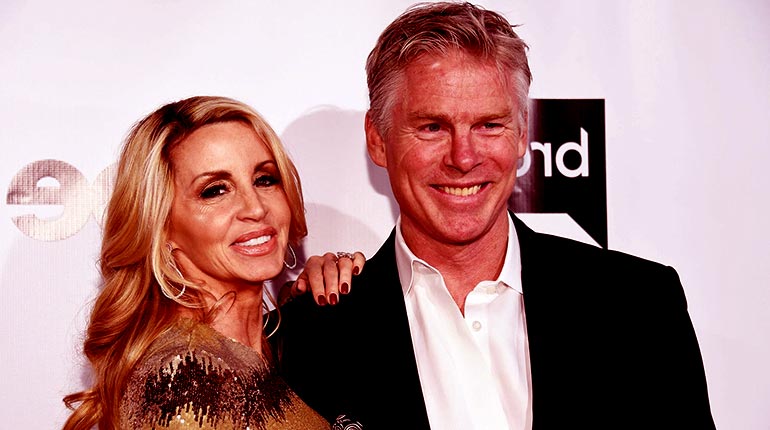 David is a famous American Lawyer turned corporate and real estate agent. What is his net worth? Read on to get all about David C. Meyer.

After a tumultuous divorce from ex-wife, David C. Meyer was lucky enough to find love again with Camille Grammer. The couple wedded on October 20, 2018, at a private beach club in Hawaii. Currently, he enjoys a healthy married life with wife Camille.

The Real Housewives of Beverly Hills cast members, who attend their wedding ceremony are Teddi Mellencamp, Dorit Kemsley, Lisa Rinna, and Kyle Richards. Also, both David and Camille’s children attended their marriage. His stepdaughter, Olivia, was a bridesmaid at their wedding.

David’s spouse, Camille, gushed about him at the time. Camille said she loves the way he looks in the wedding ceremony, David wore a white blazer and paired with black pants, and his wife wore a stunning low-cut dress. Later, the couple jetted off to Switzerland to celebrate their marriage.

Meyer and Grammer met in Malibu, California, in 2016, and eventually, the two started dating. After dating for a year, David and Camille decided to take their relationship and got engaged by October 2017.

In late October 2017, she posted a picture with her hubby, Meyer, on Instagram. Both of them looked amazing in the seventies disco style. Thus the two looked awesome on that get-up. Also, she flaunts her big sparkling engagement ring on her ring finger.

Seventies disco glam. Saturday Night Fever or "Yacht Rock" on Sirius "just when you thought it couldn't more get more smooth, it got more smoother" ?

During the time, the two go on to vacation in different countries and cities as well as attended several events together. As per outlet, Meyer made his debut on Bravo’s show, but as the series continued, his appearance has become rare.

How Many Children Do David and Camille Have?

David and Camille are the parents of four children, but they don’t have any children together. David has two sons from his previous marriage. Also, his wife has two kids from her ex-husband, Kesley Grammer, who is an actor and producer.

David was previously married to the former wife, Wendy, who legally separated from him in 2014. Wendy filed. However, he and his estranged wife, Wendy, divorced in 2017. He is the father of two sons, born from his ex-wife, but he shared joint custody of their children.

After the divorce was finalized, Wendy got the primary physical custody of their sons. According to court papers, he only sees his children about 4 to 6 days per month.

On the other hand, his wife’s daughter, Mason, and son, Jude. The family of six lives in Los Angles home, kiddos, and even travel to new places. However, he has kept a low profile of himself.

Before getting married to Camille, Wendy and David weren’t officially divorced. As per sources, The Real Housewives of Beverly Hills husband accused of physical abuse. David and ex-wife Wendy were married for eleven years.

Following the separation back in 2014, Wendy alleged that David physically assaulted her. After that, he was arrested from his home. Reportedly, Wendy asked for a child and spousal support to David, but he refused to provide her. However, he later provides the child as well as spousal support.

David Meyer is a Lawyer

Mr. Meyer is an attorney and also a partner, the law firm, Arent Fox. His office is located in different cities such as Boston, New York, San Francisco, Los Angeles, and Washington, DC. According to his website, David runs the Corporate and Real Estate Transactional practice, Meyer is a nationally recognized transactional practice that includes the auto industry, international corporations, prominent individuals, and more.

Meyer practice focuses on business transactions, financing, real estate, mergers, and acquisitions. Besides, he has been serving as a member of the National Association of Dealer Counsel since 2013. Also, he was received the AV Peer-Review rating by Martindale-Hubbell.

Meyer is Hailed From California

David Meyer was born and raised in California, but he hasn’t revealed the date of birth. Likewise, the lawyer hasn’t disclosed the details of his family, parents, and early life.

How Much is David Meyer’s Net Worth?

David C. Meyer is a famous lawyer in the United States. We are sure that he makes a hefty salary from his profession. However, Meyer’s salary and net worth both are still under wrap. Some sources claimed that David C. Meyer’s net worth is said to be over $30 million.

Meyer worked as a lawyer for several years. Back in 2016, he represented con artist Troy Stratos, who sentenced to nearly 22 years in prison and scammed $43 million from his victims and Eddie Murphy’s ex-wife, Nicole. Also, he is a partner in the firm’s Los Angeles office, Arent Fox.

On the other hand, his wife Camille earns quite a good salary from her appearance on the Bravo’s show, The Real Housewives of Beverly Hills. The reality star makes $175,000 per episode from the RHOBH. As of now, Camille Grammer’s net worth is $50 million. The couple’s combined net worth is over $80 million.

Is He Active on Social Media?

As earlier mentioned, David Meyer is very concerned about his personal life and also didn’t like to appear much in the media. Meyer is not active on any social media. He became famous through his current wife, Camille Grammer.