May 4, 2020 Celebrity Spouse, The Real Housewives of Beverly Hills 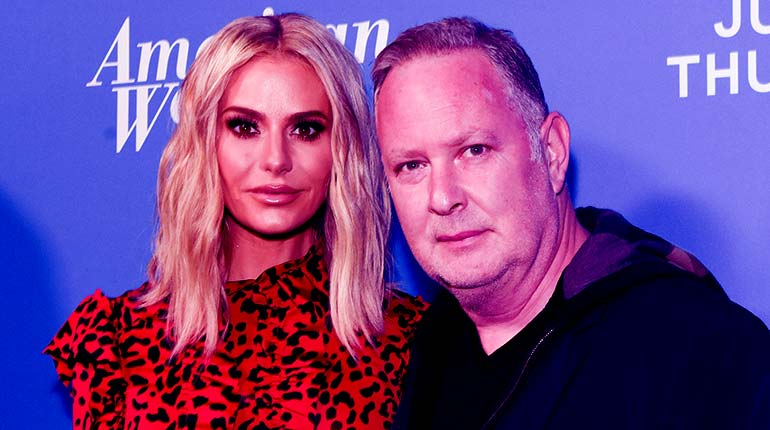 Paul Kemsley is a professional British-American businessman. But Paul is widely known as the husband of The Real Housewives of Beverly Hills star Dorit Kemsley. He gained the attention of media and public after marrying his beautiful wife, Dorit, in 2015, and since then, they’re together and living a lavish lifestyle.

There are numerous rumors about this couple. It is said that Paul Kemsley and Dorit Kemsley are no more together and head for divorce. It is one of the shocking news for The Real Housewives of Beverly Hills’ fans. Seriously, they are not together or just a hoax.

Who is Paul Kemsley?

Paul Kemsley is an English businessman and is best known as a property developer. Additionally, he is one of the prominent businessmen in the UK. Paul is the longtime sports fan and a former Vice-Chairman of the Premier League football club Tottenham Hotspur.

He owns several properties in England and America. Currently, he is the owner of the Nixxi Entertainment agency. Further, he works as a manager for pop singer Boy George.

How Did Paul Met Dorit Lemel?

While traveling to New York on business, Paul met Dorit through a mutual friend. When Paul first invited Dorit for their first official date, she declined. At the time, she headed to Hong Kong due to her work.

According to Wedding Style Magazine, Paul asked Dorit to postpone her flight, but she hasn’t thought of that. Suddenly, Dorit’s mind hit by the thing that her late grandmother told her. They went out for a date and the two have been inseparable from the first date. After six months, Paul Kemsley moved to New York and settled there.

When the couple’s parents were in town, they all dined at their favorite local spot. Then Paul dropped down on one knee and asked to marry him. Fortunately, she answered “yes” and lost “tears and champagne” followed.

Kemsley has been married twice in his life. Currently, the businessman is married to beautiful lady Dorit Kemsley who is widely known for her appearance on Bravo’s hit show, “The Real Housewives of Beverly Hills.” Dorit is a fashion designer.

Paul and Dorit said “I do” in the presence of their family, relatives and close friends in March 2015 in New York City. At the time, the couple’s son was witnessed in their marriage.

The wedding reception was held in the Rainbow Room, New York, and everything was perfect. Paul said they were surrounded by the people they love and who love them. As Paul and his wife descended the graceful stairway, the band played Bruno Mars’s song, Marry You. Later they dance to “My Eyes Adore You” from the musical “Jersey Boys,” which they saw on their first date.

The two decided to go to Bora Bora for their honeymoon, but a hurricane bearing down on the island shifted their plans to Anguilla, where Boy George and other friends joined them. As time passes, Mr. and Mrs. Kemsley’s relationship is going stronger and stronger. They have been married for five years.

Are They Still Together or Divorced?

There is rumored that Paul and Dorit have a rocky marriage and about to divorce. It was revealed on the podcast by Vulture writer Brian Moylan that the duo might be getting divorced based on gossip he had heard.

Shortly after the podcast episode, Paul and his wife shut down the rumors by sharing a post on his social profile. He uploaded a photo of the two and captioned it, “Happy Valentine’s Day to my love” with a red heart emoji.

Paul spoke with Page Six to slam the rumors of their separation and cleared that they are so much in love with each other. Also, the two celebrated Valentine’s Day together in San Fransisco with their two kids.

The businessman also opened up about why they’ve been living apart. He’s living in Australia due to his work.

Why Did Paul Kemsley Divorce From His Ex-Wife?

Dorit is not the first wife of Paul Kemsley. Paul was previously married to ex-wife, Loretta Gold, who is from Portsmouth. However, it is not known when and where Paul and Loretta got married. The date of their wedding is not revealed yet to the media.

Kemsley came to the USA with his wife and family in 2009 and resided in a vacation property owned by Debtor located in Boca Raton. Later they moved to a private home in Los Angeles, which was rented. It is unknown when he and ex-wife Loretta separated.

Loretta Gold left him and moved back to London in 2012 with their three children. However, the reason for their divorce is still unknown.

Paul Kemsley is the father of five children; three children were born from his previous marriage and two from his current wife. His three older children, Daniel, Atlanta, and Tatum, live with their mom in London, United States. Despite the divorce, he is still has a healthy relationship with his kids and even goes out for dinner or vacation with them.

While Paul was a live-in relationship with Dorit, they welcomed their first child, a son named Jagger Kemsley on February 12, 2015. Now, Paul’s son turned six this year. Kemsley shared a short clip on his Instagram that shows a throwback picture of Jagger. He captioned it, “Happy Birthday, Jagger.”

It’s your birthday here in Australia ( even though not until tomorrow where you are ❤️so you get to have 2 !!! Love you always Daddy @doritkemsley

Paul’s daughter, Phoenix, was born on February 24, 2017, and now, she is four years old. Kemsley took to Instagram and wished a happy fourth birthday. He captioned the post that read, “Phoenix, Happy Birthday Darling love you…Daddy” with a heart emoji. Phoenix just looks like her mother, Dorit Kemsley.

Phoenix loves cooking. On her brother, Jagger’s six birthday, she made a cake with the help of her mother. Doris shares numerous pictures and videos of their children on her social media.

How Long Has He Been Living in the USA?

Full name; Paul Zeital Kemsley was born on August 17, 1967, in Stanmore, United Kingdom, which makes his age fifty-two now. He is of white ethnicity and holds the citizenship of England and the United States.

Paul was educated at Atholl School in Rayners Lane, Harrow. But he didn’t complete his education. As a result, he left school to start his own business at a tender age. As you know, he is a private person and doesn’t like to talk about himself and his family.

The British native has been living in the USA since 2009. However, he split his time between the United Kingdom and the United States.

Paul Kemsley’s Net Worth is $50 Million

Paul Kemsley is a British businessman and celebrity manager. With the spanning career in business, Paul earns a hefty and indeed enjoyed success.

Kemsley started to work at the age of 17 as a junior surveyor at Gross Fine. Later he worked for commercial real-estate firm Ross Jaye as an agent from 1985 to 1992. At the age of 28, Paul launched a real estate investment and development firm, ‘Rock Joint Ventures Ltd.’

Eventually, his company became hugely successful, and by 2007, his worth was $1 billion. By the time he became the most successful businessman in London. Paul bought a London office block for $50 million then sold in $100 million to a Russian business person.

In 2007, Paul Kemsley’s net worth $250 million. In 2012, Mr. Kemsley filed for bankruptcy in New York, claiming to be $10-$50 million in debt. During the time, Paul claimed to have just $104 cash on his hand and $1000 in the bank. The same year, the real estate agent separated from his wife and paid all the personal expenses to her. Following the year, he re-attempted to file for bankruptcy.

Furthermore, Dorit’s husband wracked up $3.6 million worth of gambling debt at the Bellagio hotel in August 2018 in Las Vegas. As per sources, he paid a total of $850k to the Bellagio between 2010 and 2011.

The reality star and her husband, Paul, spent $6.5 million to Encino home in August 2019. Previously, they lived in the Beverly Hills mansion that Paul co-owned with his business partner.

Is He Active on Social Media?

Yes, he is online on all social media platforms, including Twitter and Facebook. As a businessman, social media helps him to expand his business. Also, he posts photos of his wife and kids on his profiles.

How Old is Paul Kemsley?

Who is Paul’s Current Wife?

How Many Children Does Paul Have?