May 6, 2020 The Real Housewives of Beverly Hills 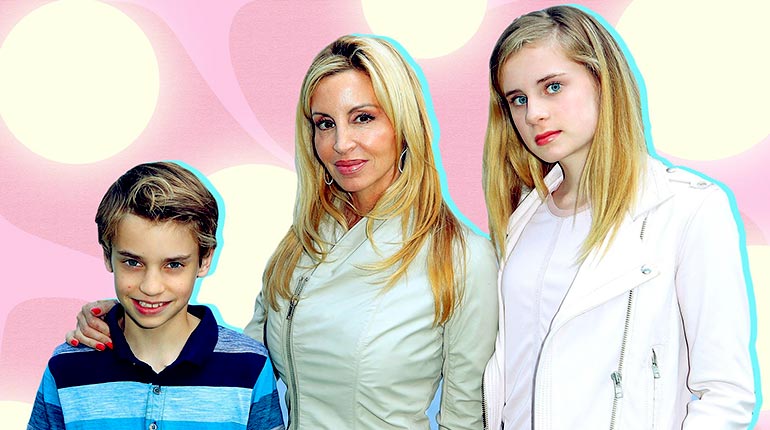 Over the years, we have been watching Bravo’s reality series, The Real Housewives of Beverly Hills, and knew everything about the fabulous and stylish ladies. But do you know about their families, parents, origins, spouses, kids, and pet animals?

Among those housewives, Camilla Grammer is one, who joined the cast during Season 10 of The Real Housewives of Beverly Hills in 2010. However, she is no longer a main cast in the show; she still appears as semi-regular housewives.

The reality star is also widely known as the ex-wife of actor Kelsey Grammar, but now she has fallen in love again with attorney David C. Meyer. Camille has two kids with Kesley. Here we uncovered the data of Camille Grammer and Kesley Grammer’s kids and their relationship. Take a look.

Camille Grammer is the Mother of Two Children

The Real Housewives of Beverly Hills star shared two kids, Mason Olivia and Jude Gordon, with her ex-husband, Kesley Grammer. The couple was together for almost 15 years, but do they shared the joint custody of their children?

Camille and Kesley shared the custody battle for their two children. After splitting the kids up, Jude lives with Kesley while Mason lived with Camille. Camille argued against Mr. Grammer’s legal letter proposal to enroll Jude in a Chicago school. She wasn’t agreed with this, so she filed documents claiming a move would disrupt his education.

They battled for their custody ran for quite a long time. The Daily News reported that the sparring ex-spouses reached an agreement in which their two children stay together and continue with Camille in Los Angeles.

Camille Grammer’s Children Were Born Via a Surrogate Mother

Camille and Kesley Grammer are the biological parents of their two children, Mason Olivia and Jude Gordon. But Camille didn’t give birth to her daughter and son. Due to Camille’s health issues, she took the help of a surrogate mother to expand her family. The RHOBH star had a form of Irritable Bowel Syndrome, which could present serious health risks is she attempted to get pregnant.

So, the couple took the help of a surrogate mother like thousands of other couples around the world to build their family. When she was asked about the identity of the birth mother of her children, she didn’t reveal her last name, but her first name is Juliana.

The Grammer’s said they met her through the Center for Surrogate Parenting. Reportedly, Juliana has given birth four times as a surrogate mother for three different families at the time. Juliana serves as a nurse in Sacramento, California, and also, she has four of her own children.

Mason Olivia Grammer is the oldest child of Camille and Kesley. She was born on October 24, 2001, in Los Angeles, California, and is 19 years old now. Mason has a younger brother, Jude. Also, she has five half-siblings named Faith, Kesley, and Auden from her father’s fourth marriage, actress Spencer from first wife, Doreen Alderman, and Kandace Greer from an ex-girlfriend, Barrie Buckner who is a hair and makeup artist.

Camille’s daughter walked into her parents’ footsteps and became a professional model as well as an actress. The blonde beauty has a height of five feet, eight inches. Growing into a tall and slender young woman started her modeling career at the age of 14. She is much mature mentally at her age.

At a young age, she conquered the runway modeling. In 2017, she walked for designer Mala Nreton’s at New York Fashion for six times. Then Mason Olivia signed a contract with Major modeling agency in February 2018. Aside from her modeling career, she tried her hand in Hollywood and appeared in a few projects.

Although for her, modeling is just for fun. She has a different goal and ended up as a fashion designer. Currently, she is enjoying her modeling career. Also, she is stepping out looking for new opportunities.

Yes, Mason does have an Instagram account under the name “@mason.grammer.” Olivia Grammer’s Instagram profile doesn’t have a ton of posts yet, but it’s gaining a massive number of followers.

As for content, the model posts her pictures, and also, she shares some personal posts. In addition, Mason is into several different solo sports. The model is a fan of downhill skiing and mentioned it in an Instagram post. Further, she is into yoga and loves hiking and many more.

Wish I was still skiing.

Camille’s daughter loves being in front of the camera, whereas her son stays away from the limelight. Jude was born on August 28, 2004, in Sacramento, California, and is 15 years old now. Gordon Grammer is a student and is in high school. Jude was also born from a surrogate mother, Juliana.

Jude and his family went to Disney California’s Adventure Park to celebrate his 15th birthday. His mother even documented the excursion on Instagram.

Happy 15th Birthday Jude Gordon Grammer! I love you so much! You have brought so much joy into my life. I’m so proud of you ❤️???

Camille made a rare appearance in public, as well as her social profiles. Camille and her two kids celebrated the New Year 2020 in Hawaii. The RHOBH veteran posed a picture in a gorgeous one-piece swimsuit as she lounged in a hot tub with her kids.

Family fun. Goofing around with the kiddos. ?☺️ Goodbye 2019.

Jude loves to keep his personal life to himself, and also, he is not active on social media. However, you can get the latest about him from his mother’s social accounts like Instagram.

On May 2, 2020, Jude’s mother shared a throwback picture of him and his sister on Instagram. She cut off the burnt edges and framed it.

Pictures that were saved from fire. I cut off the burnt edges and framed this. My little ones aren’t so little anymore. Love you @mason.grammer and Jude Gordon Grammer. ❣️

Camille Grammer is the Third Wife of Ex-Husband, Kesley Grammer

Before getting married to Camille, Kesley Grammer was married twice. Camille Donatacci and Kesley Grammer were met on a blind date in 1996. Apparently, the two hit off pretty well and began dating. After dating for a few months, the former model and Kesley officially became husband and wife in 1997.

After the marriage, the two moved into a luxurious Malibu mansion and built a family. The couple looked to be happy, but who knows that they started to have problems very early on in their marriages. Ultimately, the former model and Grammer ended up divorcing in 2011.

Once their divorce was finalized, Camille found new fame and was cast on Bravo hit reality series, The Real Housewives of Beverly Hills. Shortly after their divorce, her former husband got married to fourth wife Kayte Walsh, an English flight attendant.

Camille lives a single life for almost seven years. After the bitter divorce, she found love again and got married for the second time with David C. Meyer in 2018.